This is a first time experience for me. For some reason I had never considered sharing my story like this, but after reading so many of them, they have helped me in ways I couldn’t have realized. I guess I want to say that this is my way of paying something forward.

I always felt a disconnect between my personal feelings and what was being taught by the church. I also hated that some of the questions I would ask could never be answered, they just pointed to this scripture or that talk from that person, but never really answered what I asked. This process left me to feel alone and somehow broken because either I felt like I was asking inappropriate questions, or the questions I was asking were leading my church leaders to believe I was sinning and unworthy.

I am from Ogden, Utah, born and grew up in the Church of Jesus Christ of Latter day Saints, but stopped being active in church (other than going to activities with friends) when I was about 16-17ish. It was the time that I really embraced who I was. It was the time that I also realized with full understanding that even though the Church puts on a loving facade, they really DO NOT have a place for people like me in the Church.

I came out to a few friends during high school and some shortly after and most of them have been awesome to me. The other few were still accepting of me, but we just don’t seem to talk as much any more.

Of all the coming out experiences, my parents reaction was the worst. 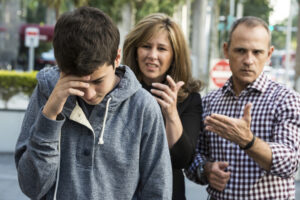 I just came out to my parents last year, June 8th to be exact. I left them a letter in their car right before they left to chaperone and haul a load of young women to a girl’s camp. When they returned my dad talked to me and pretty much told me that they believe the church’s view of the lgbt “lifestyle,” and that they didn’t want me to aspire to that pattern. They told me I had to try and pray for help to resist the lifestyle and temptation (pray away the gay pretty much) and get a testimony of Jesus and the church to help me. They told me I will be happier in a straight relationship, even if I still have the feelings of attraction to men. My dad equated it to being an Achilles heel, something I should avoid like people should avoid pornography. As my parents sat down in the chairs in front of me they used my siblings as excuses why I shouldn’t be gay. They told me that if I choose to live a gay life, my brothers and sisters would be denied the opportunity to spend eternity with me in the Celestial kingdom and only I was the one responsible for that burden. My dad assured me that finding a man would also mean I would find diseases like AIDS and other illnesses…it was obvious they were trying to burden-shame me into changing my mind (as if I chose this in the first place.)

Like all Mormon families, they followed up conversation with phrases like “they love me” and “appreciate me being honest about my feelings.”

They way they handled the whole thing kinda made me feel like shit.  How could you not leave that discussion and feel like all of this is just a selfish act, and I needed to somehow stop being who I am? It was like my dad was telling me to stop having brown eyes and tomorrow make the decision to change my skin color! They basically were saying I need to live a life away from any temptation to live a gay lifestyle, because there is no happy ending to living that “lifestyle”. Also pretty much that if I pray hard enough and believe God will help me at least curb my feeling if not rid me of them. So I cannot even entertain the idea of wanting to even be romantically involved with a guy let alone becoming sexual with one as long as I live with them, and they would prefer for me to never get involved. And they also asked they I not come out to my siblings either.

In the time since I came out, things have not really changed much other than my mom is a little more understanding of things like Pride and will put people including my dad in check when they make comments like “when will there be a straight pride?” But she really hasn’t come around to the idea of me dating or marrying a man yet.

I just don’t know how much longer I can keep up this respect/honor for them and not take care of myself. I also have a huge crush on my bosses son that just got back from his mission 5 months ago. Some of the things he says and does make me think sometimes he might be interested in guys on some level, but I am not sure.

Friends, we aren’t broken. If you are a parent or church leader reading this and you can’t see anything wrong with my parents’ reaction, then I invite you to learn more about this experience. The lives of so many vulnerable and beautiful people are waiting on you to embrace them. Please?

Each Sunday we feature a new Coming Out Story on the Latter Gay Stories website. Coming out is an important process that is different for everyone.  Some experiences are difficult; while others are heart-warming and inspiring.

Coming out is rarely easy—but your story will help others draw inspiration and make progress by learning from your experiences.

We rely on weekly submissions to keep the Coming Out Stories alive and invite you to share your story now.

Posted In Coming Out Stories

Hi, I am Jacob